A Pony for Keeps

Will Anna have to give up her pony?

I Want a Pony

A Pony in Trouble

A Pony for Keeps is the second book in the Pony Pals Series by Jeanne Betancourt, published in January 1995. It stars Anna. It is followed by A Pony in Trouble.

Anna loves her pony, Acorn. She knows that he is perfect for her. But her parents think Acorn is the reason why she is doing badly in school. If she doesn't get better grades, they will take him away.

Pam and Lulu, her Pony Pals, want to help. They know how much Anna loves her pony. Can the Pony Pals help Anna and Acorn? Will Acorn be a pony for keeps?

Anna, Pam, and Lulu are out riding their ponies and Anna is trying to keep her mind off her problem - she is getting bad grades at school, and her parents have told her they will give her pony, Acorn back to Reggie Olson(the man they are leasing him from) if she doesn't improve. Anna is also having difficulty with Acorn's stubbornness - he doesn't always follow her commands, and unlike Snow White and Lightning, he won't jump.

On their trail ride, the Pony Pals decide to ride their ponies to the Wiggins Estate because of the great riding trails there. There are some new "No Trespassing" signs, but Pam insists those are for hunters, not kids on their ponies. They ride farther than they have gone before, until they see the Wiggins mansion. When they see the woman who lives there out riding her horse, they decide to gallop their ponies away from the mansion.

The next day, the Crandal family goes to Reggie Olson's farm to check out his stock, because they are considering getting ponies for Pam's younger twin siblings, Jack and Jill, soon. Anna goes with them so she can ask Reggie about Acorn. He tries to convince her that she should be riding a horse instead of a pony, so she won't get too big for her pony and because he has another family that would be interested in buying Acorn. Anna insists she wants to keep Acorn, and in fact would like to buy him, not just lease him. Reggie goes to his office to print out the point of sale for Anna to bring home to her parents. After he does this, Anna asks how many previous owners Acorn has had. Reggie types Acorn's name into his computer program, and discovers that eight homes in twelve years were listed as having owned or leased, which is quite higher than average. Anna believes this is why Acorn is so stubborn and doesn't always listen to her. Lulu notices that Tommy Rand is on the list of previous owners or leasers of Acorn. Tommy is the meanest and bossiest eighth-grader they know, and Anna doubts he treated Acorn well. This motivates Anna further to try to buy Acorn and get her grades up, because she doesn't want him sent to live with another mean kid like Tommy Rand.

The following morning, Anna decides to skip school and take Acorn out for a ride, telling Lulu that she is sick and her parents that she is walking to school as she normally would. She steers Acorn away from the Crandal's ranch, where they would question why she wasn't in school, and towards the scary and unknown Wiggins Estate, where she promises to herself she won't go far. She actually gets Acorn to jump, and she is proud of Acorn and herself. She soon sees the same woman she and the other Pony Pals saw the other day - the "Wiggins Witch" who dresses in red, has a black horse, and lives in the Wiggins mansion.

When Anna talks to the woman, she discovers that her name is Wilhelmina Wiggins, more commonly called Willie, and she is a very nice woman - not at all what Pam, Anna, and Lulu feared. Her horse is Picasso, and she still has her childhood pony, Winston, that she is too big to ride but can drive by harnessing him to a cart. Willie lives in the large mansion all by herself, and the house is full of her paintings. Anna talks to Ms. Wiggins about her problems with school, and that because of it she is going to lose Acorn. Ms. Wiggins asks Anna a lot of questions, and guesses that Anna may have dyslexia, which is why she has trouble with school. Ms. Wiggins suggests that Anna get a tutor and tell her parents and teacher. Soon Anna and Pam show up on their ponies, having followed her pony's tracks to find her since they thought she might have run away.

The next morning at school the Pony Pals meet early to come up with a plan that will allow Anna to keep Acorn. They want to tell their teacher Mr. Livingston about dyslexia and get Anna tested, and they want to tell Anna's parents so they understand why Anna's having trouble in school. Lulu suggests she will do Anna's pony chores so Anna will have more time to study and it's only fair because Lulu boards her pony, Snow White, at the Harley's paddock and doesn't pay for it. When they talk to Mr. Livingston, he says he will have no problem getting a specialist to help her if he can get her tested.

When they get home from school, planning to tell Anna's mother, they discover no one's home and that Acorn is gone. Anna bursts into tears and they run to the Off-Main diner which Anna's mother owns and works at. When they arrive they see that Ms. Wiggins is already there, talking to Anna's mother about dyslexia. After Anna's mother talks to them and phones Anna's father, who had just talked with Mr. Livingston, Anna's mother delivers the verdict - taking away her pony is too much of a punishment for something that hasn't been her fault. Anna can buy and have Acorn back - if she can get to Reggie Olson's stable in time, before the other family interested in Acorn buys him.

Anna gets her mom to sign the papers and give her a check to buy Acorn, and she sets off to Reggie Olson's farm on a pony cart with Ms. Wiggins and her pony, Winston. Anna buys Acorn and rides him back to her home. She is also happy because now that she knows about pony carts, she doesn't have to worry about outgrowing her pony, and she can ride and own him as long as she wants. 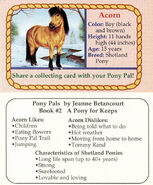 Acorn's collecting card found in this book.
Add a photo to this gallery
Retrieved from "https://pony-pals-book-series.fandom.com/wiki/A_Pony_for_Keeps?oldid=601"
Community content is available under CC-BY-SA unless otherwise noted.