Ponies from the Past

What's Wrong with My Pony?

He's My Pony! is the thirty-second book in the Pony Pals series by Jeanne Betancourt, first published in August 2001. It stars Anna. It is followed by What's Wrong with My Pony?.

Anna knows Acorn is a special pony. So, when the Pony Pals teach a girl with cerebral palsy to ride, Anna lets them use Acorn. Anna's pony really likes Christine. He even does a new trick for her without any signal from Anna.

Anna doesn't want to be jealous. But sharing a pony can be hard. Then, when Christine comes up with better face-painting designs for the town carnival, Anna can't take it anymore. Do the Pony Pals think Christine is a better artist than Anna? And worst of all, does Anna's pony like Christine better? 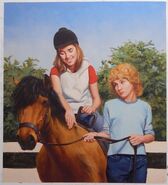 Original Oil Painting
Add a photo to this gallery
Retrieved from "https://pony-pals-book-series.fandom.com/wiki/He%27s_My_Pony!?oldid=552"
Community content is available under CC-BY-SA unless otherwise noted.