Can Pam and Lightning help the Blind Pony?

The Blind Pony is the fifteenth book in the Pony Pals series by Jeanne Betancourt, first published in July 1997. It stars Pam. It is followed by The Missing Pony Pal.

Kim and her Dartmoor pony, Dandy, are visiting Wiggins. When Pam and Lightning meet Kim and her pony, they both sense something is wrong. Pam thinks Kim's pony is blind!

Kim doesn't want anyone to know about her troubled pony. She makes Pam promise not to tell anyone - even the Pony Pals! Pam has to do something. Why is Kim keeping a secret? What will happen to the blind pony?

Bookmark found in this book (front and back). 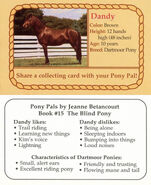 Dandy's collecting card found in this book
Add a photo to this gallery
Retrieved from "https://pony-pals-book-series.fandom.com/wiki/The_Blind_Pony?oldid=458"
Community content is available under CC-BY-SA unless otherwise noted.